The sound of resistance under Trump

A new wave of protest songs is flooding Trump's era, and it is different from anything we've ever seen before.

Since the announcement of Donald Trump’s candidature, the music panorama has produced an unprecedented wave of protest songs in the US.

What makes this wave really different from past ones (e.g. Civil Rights movement, Vietnam War, Bush administration etc.) is its extreme variety. Artists from every background and genre have released songs and videos to take a strong stance against Donald Trump’s policies, statements and person itself. The protest music of the past tended to lean towards singular genres: the ’60s had folk music and rock, the ’80s had punk, the ’90s had rap and hip hop. All were tackling issues specific to the social justice movements of their time. If on one hand the 2000s have been dealing with an extreme range of issues, and as a result a wide range of genres has responded, in Trump’s case this wide range of genres is focusing on a specific issue: the risk he represents for the future of American democracy and social justice.

Among the many chants heard during anti-Trump demonstrations all over the world, one is particularly direct, effective and energic: “No Trump! No KKK! No fascist USA!” It all began during the 2016 American Music Awards (AMAs), shortly after the election. World famous and politically minded punk-rock band Green Day, who also released in 2004 an entire album named American Idiot against George W. Bush, were performing their single Bang Bang; during the bridge, frontman Billie Joe Armstrong shouted the chant six times.

The millions watching the AMAs didn’t need to know their punk history to appreciate the message. But there is a history to be told. The chant is an updated version of lyrics contained in a 1982 punk song, Born to Die, recorded by a very radical band called MDC. As reported by The Guardian:

In the band’s hometown in 1980, the Ku Klux Klan was harassing Latino farmworkers while trying to recruit new members at punk shows, much as the National Front did in Britain. The punk scene’s resistance to the Klan inspired the band, then called the Stains, to write a frantic two-minute tirade called Born to Die, with the blurted chant: “No war! No KKK! No fascist USA!”

In a later interview with Rolling Stones, Armstrong made sure to point out the original source of his “No Trump” chant, adding:

“We didn’t rehearse it. We’re just as much in shock as everybody else is about this, but I think with the AMAs [performance], it was a good start to challenge [Trump] on all of his ignorant policies and his racism.” 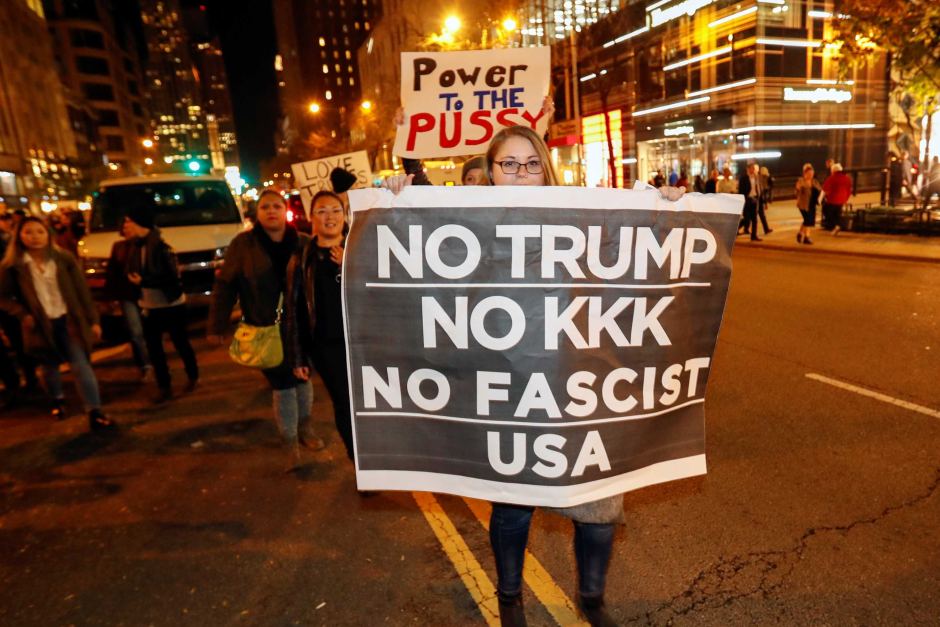 Even if the song that originally contained the chant is now credited, the chant has taken on a life of its own. It already happened most famously with the Plastic Ono Band’s Give Peace a Chance.

Protest music against Trump has an unprecedented variety also thanks to initiatives that succeeded to create platforms/projects in which collecting and coordinating the efforts of different artists, linking them to practical social causes and actions.

This is the case of Our Fist 100 Days, a project that aims to raise funds and awareness for organizations supporting causes that are under threat by the proposed policies of the Trump administration. The Secretly Group, a collection of independent American labels including Secretly Canadian, Jagjaguwar, Numero Group and Dead Oceans, will release one previously unreleased song a day for the first 100 days of Trump’s presidency. They will sell the songs in a subscription format, via Bandcamp, for a minimum contribution of $30. Though the tracks themselves may not necessarily be political in content, all profits will benefit organizations that stand in opposition to the Trump presidency: All Above All for reproductive rights, Cosecha for immigration, Hoosier Action for community organization, People’s Climate Movement for climate change, and Southerners On New Ground for LGBTQ.

In an interview with The Guardian, Jon Coombs, general manager of Secretly Publishing, explained that the idea came out in November, a couple of days after the election:

“If there was one silver lining that came [out of the election], it was the way the music industry started putting their tools to work, and so I looked at what we had, and I thought: we can do some good work here.”

Our First 100 Days was inspired by another project, 30 Days, 30 Songs, with which they started a partnership. Founded by the writer Dave Eggers and artist manager Jordan Kurland, 30 Days, 30 songs released one song, written and recorded “for an inclusive, compassionate and just America” a day in the month before the election. After the election, it has been extended to an astonishing 1,000 songs in 1,000 days, with the aim of helping people through the four years of Trump’s presidency. How? All proceeds from the streaming of original 1,000 Days, 1,000 Songs releases will be donated to the Center for Popular Democracy.The huge playlist, that is growing day by day, has been defined as ”

The huge playlist, that is growing day by day, has been defined as “A playlist of songs that Donald Trump will hate” by the Washington Post and it features “original tracks, unreleased live versions, remixes, covers, and previously released but relevant songs that will inspire and amuse and channel the outrage of a nation.”  You can listen to some evergreens like Mississipi Goddam by Nina Simone, Where Have All the Flowers Gone? by Pete Seeger, This is not America by David Bowie or Talking ‘Bout a Revolution by Tracy Chapman. But also brand new songs by artists such Death Cub for Cutie, Franz Ferdinand or Moby.

Trump presidency has also interrupted a six-year hiatus of the English “virtual-band” Gorillaz, created in 1998 by Damon Albarn and Jamie Hewlett. After Trump won the election and just the day before his Inauguration, they released a song called Hallelujah Money, featuring Benjamin Clementine on vocals. The song comments on money and power, and seems to be made in part to question the impact of Trump’s inauguration and to mourn the prioritization of power and greed in our current world. It includes lyrics such as “And I thought the best way to perfect our tree / Is by building walls,” and the line “Love is the root of all evil.”

In the clip of the song, Clementine stands in the gold-plated elevator of Trump Tower, delivering his pronouncement of disappointment in front of a flickering screen that flashes through other landmark moments. The images behind him cut from native dancers in Africa, to the La Candelaria brotherhood in Spain (a Spanish group that dresses in white robes similar to the Ku Klux Klan, but has no affiliation), drawing throughlines from various cultures and tribes, until an appearance from the familiar silhouette of 2D crops up at the end.

Categories
Sounds from the Bucket