Jim Crow and the blues

In simple words: blues wouldn't exist without Jim Crow. But who is Jim Crow?

Men carry the coffin of Jim Crow through the streets to protest racial discrimination in 1944. Credits: Corbis
by Marco Principia 13/01/2017

“Come listen all you galls and boys,
I’m going to sing a little song,
My name is Jim Crow.
Weel about and turn about and do jis so,
Eb’ry time I weel about I jump Jim Crow.”

“Jim Crow”, or “Jump Jim Crow“, is a fictional blackface character brought to the American audience in the early 1830s by the white actor Thomas Dartmouth “Daddy” Rice. The song and dance that accompanied were supposedly inspired by those of a physically disabled African slave. Rice himself, claimed to have first created the character after witnessing an elderly black man singing a tune called “Jump Jim Crow” in Louisville, Kentucky.

As the white audience was receptive to the portrayals of blacks as singing, dancing, grinning fools, the song became an astonishing 19th-century hit and Rice performed it all over the country and in Great Britain, becoming the “Father of American minstrelsy”, always donned blackface and performing jokes and songs in a stereotypical slave’s dialect. “Jump Jim Crow” initiated a new form of popular music and theatrical performances in the United States that focused their attention on the mockery of African-Americans. This new genre was called the minstrel show.

As he extended it from a single song into an entire minstrel revue, Rice routinely wrote additional verses for “Jump Jim Crow”. Published versions from the period run as long as 66 verses and one extended version of the song, as archived by American Memory, includes 150 verses!  The lyrics, as most commonly quoted, are:

Come, listen all you gals and boys, Ise just from Tuckyhoe;
I’m goin, to sing a little song, My name’s Jim Crow.

CHORUS [after every verse]
Weel about and turn about and do jis so,
Eb’ry time I weel about I jump Jim Crow.

I went down to the river, I didn’t mean to stay;
But dere I see so many gals, I couldn’t get away.

And arter I been dere awhile, I tought I push my boat;
But I tumbled in de river, and I find myself afloat.

I git upon a flat boat, I cotch de Uncle Sam;
Den I went to see de place where dey kill’d de Pakenham.

And den I go to Orleans, an, feel so full of flight;
Dey put me in de calaboose, an, keep me dere all night.

When I got out I hit a man, his name I now forgot;
But dere was noting left of him ‘cept a little grease spot.

And oder day I hit a man, de man was mighty fat
I hit so hard I nockt him in to an old cockt hat.

I whipt my weight in wildcats, I eat an alligator;
I drunk de Mississippy up! O! I’m de very creature.

I sit upon a hornet’s nest, I dance upon my bead;
I tie a wiper round my neck an, den I go to bed.

I kneel to de buzzard, an, I bow to the crow;
An eb’ry time I weel about I jump jis so.

The unprecedented success of the minstrel clearly shows boosted the spread of the term “Jim Crow” as a racial slur: by the late 1830’s it was used as a collective racial epithet for blacks, not as offensive as nigger, but similar to coon or darkie. To call someone “Jim Crow” wasn’t just to point out his or her skin color: it was to reduce that person to the kind of caricature that Rice performed on stage.

Jim Crow’s popularity as a fictional character eventually faded out, but in the late 19th century the term found new life as a blanket term for a wave of anti-black laws laid down after Reconstruction: the so-called “Jim Crow laws“. In fact, after the Civil War, Southern States passed laws that discriminated against newly freed African-Americans; and as early as the 1890s, these laws had gained a nickname. The phrase “Jim Crow Law” can be found as early as 1892 in the title of a New York Times article about voting laws in the South and in 1899, North Carolina’s Goldsboro Daily Argus published an article subtitled “How ‘Capt. Tilley’ of the A. & N.C. Road Enforces the Jim Crow Law.”

But how did a racist performance in the North of the US come to represent racist laws and policies in the South? According to David Pilgrim, Director of the Jim Crow Museum and Vice President for Diversity and Inclusion at Ferris State University, interviewed by National Geographic:

Sometimes in history a movie comes out or a book comes out and it just changes the language … and you can point at it. And in just this case, I think it just evolved. And I think it was from many sources.

Probably a question would arise: how is all of this related to the blues?

To put it simply: the blues wouldn’t exist without “Jim Crow”. It’s the American system of racial inequality and segregation that made life a hell for African-Americans in the South. Once the blues era began, the term started to show up in several songs making an overt protest against the racist system.

One of the earliest examples is Northbound Blues by American singer and pianist Maggie Jones. This 1925 song contains trenchant references to the “Jim Crow laws” that are unusual for a classic female blues singer.

Got my trunk and grip all packed
Goodbye, I ain’t coming back
Going to leave this Jim Crow town
Lord, sweet pape, New York bound

Got my ticket in my hand
And I’m leaving dixieland

The Mason-Dixie line was surveyed between 1763 and 1767 by Charles Mason and Jeremiah Dixon in the resolution of a border dispute involving Maryland, Pennsylvania, and Delaware in Colonial America. In popular usage, the Mason–Dixon line symbolizes a cultural boundary between the North and the South (Dixie). After Pennsylvania abolished slavery, it served as a demarcation line for the legality of slavery. So, in this song, Maggie Jones sang the dream of thousands of black people at that time: go North, where slavery didn’t exist and where they could be free.
But reality was harsh also outside “Dixieland”, in the North. Charles Edward “Cow Cow” Davenport was an American boogie-woogie and piano blues player as well as a vaudeville entertainer. He was another singer to make an overt statement about going North to escape “Jim Crow”. But in his 1927 song “Jim Crow Blues“, there is no happy ending:

I got a hat, got a overcoat, don’t need nothing but you
These old easy walkers going to give my ankles the blues
But when my girl hears about this, oh, that will be sad news.

I’m going up North, baby I can’t carry you
Ain’t nothing in that cold up there a ?? can do
I’m gonna get me a Northern girl, see that I am through with you Lord

But if I get up there, weather don’t suit, I don’t find no job
Go and tell that boss man of mine, Lord I’m ready to come back to my Jim Crow town

There is no job for black people up North, because “Jim Crow” is everywhere. This bitter conclusion is the same idea that backgrounds Leadbelly‘s 1930 song “Jim Crow Blues“. Segregation and discrimination are everywhere, not only geographically, but also on the radio, in movies and in newspapers.

One thing, people, I want everybody to know
You’re gonna find some Jim Crow, every place you go

Down in Louisiana, Tennessee, Georgia’s a mighty good place to go
And get together, break up this old Jim Crow

I told everybody over the radio
Make up their mind and get together, break up this old Jim Crow

I’m gonna sing this verse, I ain’t gonna sing no more
Please get together, break up this old Jim Crow

Like Leadbelly and Cow Cow Davenport, also Josh White started addressing political issues in a straightforward manner in his songs. He was an American singer, guitarist, songwriter, actor and civil rights activist. He also recorded under the names Pinewood Tom and Tippy Barton in the 1930s. Beginning in 1940, White established a long and close relationship with the family of Franklin and Eleanor Roosevelt, and would become the closest African-American confidant to the President of the United States; and the Roosevelts were the godparents of Josh White, Jr. too.

In 1941, he released another highly controversial record album, “Southern Exposure”, the subtitle of which was “An Album of Jim Crow Blues”. The album featured revelatory yet inflammatory songs. One of them is “Jim Crow Train“, a classic protest song against the Southern system, which also features one of the greatest recorded train imitations. The train sang by White is a “segregated train”, where coaches for whites are way better and blacks can’t enter them, except those who have to serve. While usually “first class” and “second class” are divided on economic basis, in this case it’s a racial matter.

As shown in the cover image of this article, in 1944, the Detroit chapter of the National Association for the Advancement of Colored People (NAACP) held a mock funeral for Jim Crow. But, unfortunately, it took more than that to bury him. Jim Crow was well alive when in 1960 four black students in Greensboro, North Carolina, entered a Woolworth chain’s café and sat at the “whites only” counter asking for coffees. Following store policy, staff refused to serve them and the store manager asked them to leave. However, inspired by Martin Luther King, Jr. and his practice of non-violent protest, the four freshmen stayed until the store closed that night. The next day, more than twenty black students, recruited from other campus groups, joined the sit-in despite the provocations and jokes perpetrated by white segregationists. On the third day, more than 60 people, both black and white, came to the Woolworth store. On the fourth day, more than 300 people joined. 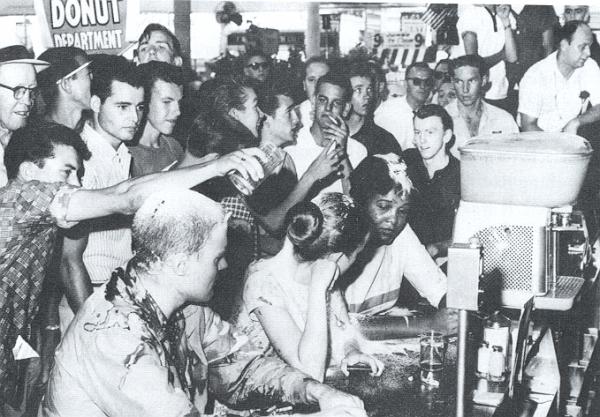 As early as one week after the Greensboro sit-ins began, students in other North Carolina towns launched their own. The movement then spread to other Southern cities, and a massive boycott campaign dropped sales by a third, leading their owner to abandon segregation policies. After five months (and nearly $200,000 in losses – $1.6 million today) the Greensboro store manager abandoned segregation policy. The Greensboro sit-ins and other Jim Crow-related episodes, happened between 1959 and 1960, are depicted in a song by Bill McAdoo (with Pete Seeger playing banjo), recorded in 1960 and called “I Don’t Want No Jim Crow Coffee“.

Finally, in 1963 participants in the March on Washington for Jobs and Freedom symbolically buried Jim Crow. Times were rapidly changing: the Civil Rights Act in 1964 first and the Voting Rights Act in 1965 after, definitely hit hard racial discrimination in the South by banning segregation in public accommodations and outlawing the poll taxes and tests that were used to stop African-Americans from voting.

“Jim Crow” was over. And Nina Simone could sing it loud and clear in her 1964 “Old Jim Crow“, recorded live during her 21 March concert at the Carnegie Hall in New York.

Categories
Sounds from the Bucket