<div class="at-above-post addthis_tool" data-url="https://www.wordsinthebucket.com/china-expansion-plan"></div>Each one of you must be aware of the term Imperialism that created an unequal relationship between a superior power and the inferior. (Well, what made them...

Each one of you must be aware of the term Imperialism that created an unequal relationship between a superior power and the inferior. (Well, what made them superior is based on the resources available in hand, the military, easy access to transport systems, et al.) But, when the sun finally set for the British Empire, a new wave of New Imperialism or Neo Imperialism order came to the fore. This New Imperialism was a result of the economic system which had developed as a consequence to the Industrial Revolution. Thus, it was not in direct contravention to the political subjugation but an indirect one where the main aim of the conqueror is to control and dominate a country/region using its sphere of influence and by signing economic and commercial agreements. Thus, the main drivers for its growth were the motives to acquire new markets and sources of raw material.

China, the fast rising global leader has several ambitious long-term infrastructural development plans in the pipeline. Recently, it has announced to invest in building a 5,300 kilometres long high-speed railway line pass through the Amazon Rainforest linking the Atlantic with the Pacific Ocean. The plan for developing the railway line evokes the memories of the Trans-Amazonian Highway, the 2,500 mile road built by Brazil in the 1970s. Although,the main aim of road building was to bring access to the previously remote areas, but what we saw was just the opposite and the development outsized environmental impacts. The road development facilitated colonization and invasions of once remote areas by miners, illegal loggers, hunters and land speculators –leading to destruction of the dense tropical rainforest.

The rail development plan, as postulated by the Chinese government, says that the high-speed railroad would start in Acu, Rio de Janeiro (Atlantic Ocean) and cross through the Amazon Rainforest and Andes Mountains to reach the Peruvian coast (Pacific Ocean). Major think tanks are of the opinion that the development of railways is Beijing’s attempt to create its sphere of influence in America’s backyard as a response to the expanding US presence in Asia. 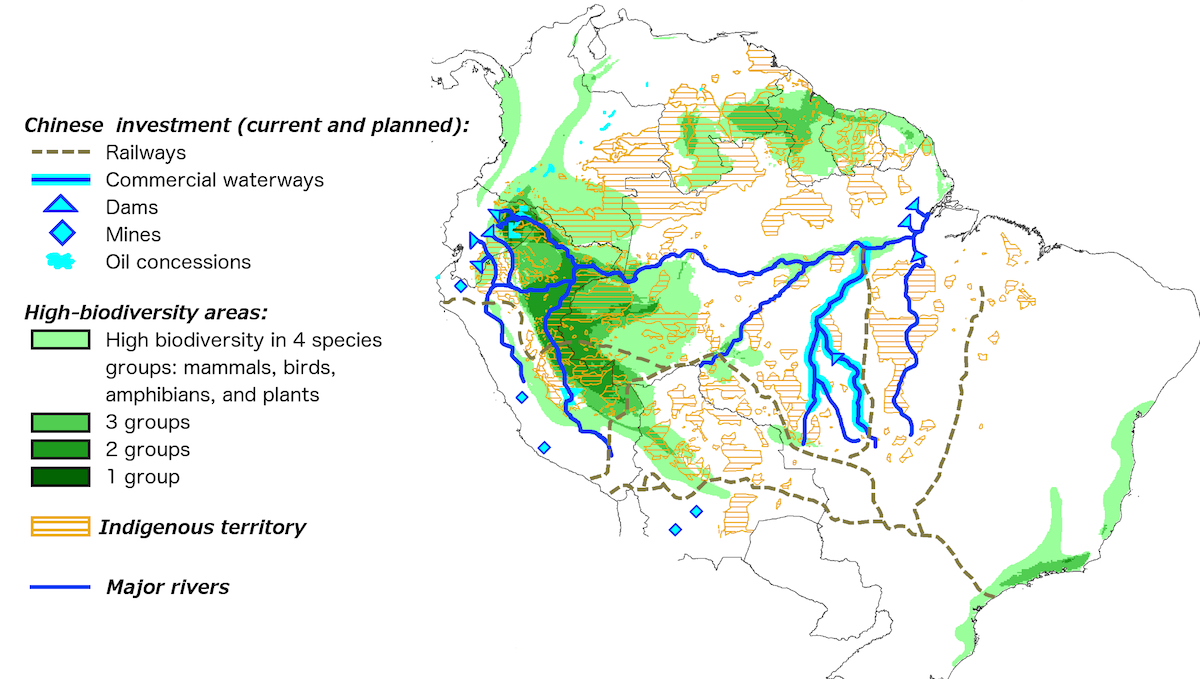 Bill Laurence, an ecologist from the James Cook University, said: “This massive project will cut straight into the heart of the biologically richest real estate on the planet—the western Amazon. It will also slice through endangered habitats in the Brazilian Atlantic rainforest and the rapidly vanishing Cerrado savanna-woodlands. By penetrating into these remote regions, it could open a Pandora’s Box of environmental evils—including deforestation, poaching, illegal mining, and land speculation. Everything about it says ‘environmental disaster’ in the making.”

Furthermore, the recent investments in heavy industry could promote road-building in the region if stringent safeguards are not enforced. This will give an easy access to the remotest tribe living in the dense woods of Peru’s Madre de Dios region. This area is richest in biodiversity and if we see the flora and fauna of this region, it is home to over 10,000 floral species, 600 avian species and about 200 mammal species. As the railways is likely to pass through Brazil’s Cerrado, a unique area of tropical grassland and woodland will get vanished which provides key habitat for certain threatened species like giant anteater, maned wolf and Spix’s macaw.

What could be the probable intentions of China for developing regions on such a massive scale? The answer lies in the trade relationships with Brazil. Reports suggest, that China is Brazil’s largest trading partner and now China’s appetite for raw material and market has grown passively. And the bulk of Chinese imports traverse through Panama Canal where the transportation rates have been tripled in the past five years. So, China has plans to build 170-mile long canal linking two deep oceans (Pacific and Atlantic) across Nicaragua and bringing an alternative to the Panama Canal (which has friendlier ties with America). Thus, if Latin America wants to have negligible impact on forest and marine resources and want to prevent the displacement of indigenous tribes, it should seriously listen to the concerned voices raised by the environmental institutions and plan effectively from beginning till the implementation stage.

Conclusively, we can say that if we turn to our history books, it said that “The Sun Never Sets in East”! This was mainly because the British Empire had developed a vast network of excellent transportation system at that time. It had connected Europe with ports, railroads and roads. Wherever they went, they enabled and embedded their power just like veins and bones in a body. Once it was England, today it is China which has taken it to South America, Africa, Himalayas and elsewhere in pursuit of its larger ambition of ‘resource grab’. In the garb of infrastructural development and economic aid, China’s ‘real intention’ is to develop history’s most extensive global commercial empire so as to counter the US in Asia. It is building Chinese financed dams, railroads, ports, roads, natural gas pipelines and airports from Jakarta to St. Petersburg, Rio de Janeiro to Samoa, Vanuatu to Mombasa and even from Antarctica to Arctic. The country wants to pave way for the development of ancient Silk Route (both land and sea).

Akanksha Mittal, an avid reader, frequent traveler and a passionate blogger hails from Delhi, the capital of India. Her key areas of interest lies in politics, foreign policy, and international relations. When it comes to learning about different faiths and cultures, she is always curious. She can be reached at [email protected]
No Comment